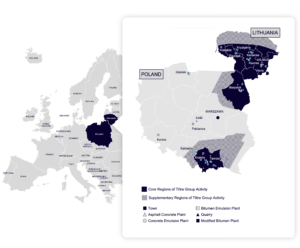 Kauno Tiltai was established in 1949 with the purpose of rebuilding roads after the World War II. The company has constructed and reconstructed a large number of roads in Lithuania and built over 100 bridges. The company was transformed during Invalda’s period of ownership from being a local Lithuanian road construction company at the time of entry, to becoming a regional infrastructure construction group operating in Lithuania and across Poland at the time of exit.

Efficiency.  Focusing management on the necessity to substantially increase efficiency across the company’s processes.

Focused management on increasing the participation in cross-border tenders.

Optimising leverage for growth. Invalda implemented a policy of using leverage more optimally to finance growth of the business. Invalda team led all the negotiations with the banks to achieve this.

Reporting and budgeting. Financial planning, budgeting, reporting and analysis systems were introduced to accelerate growth of the company and ensure efficient management.

Taking into account the selling price of the acquired financial instruments, currency exchange rate and expenses related to the transaction, the final amount received for the deal was EUR 30.4 million. In spite of a decline in the share price before Invalda could realise its full proceeds, Kauno Tiltai/Tiltra transaction remains one of the most profitable and successful deals of Invalda, generating 4.2x cash on cash multiple and IRR of 34.1%.